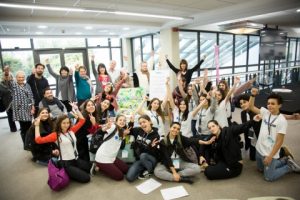 MDA Hellas participated in the first conference of PeaceJam in Greece, which was held at Deree – The American College of Greece on 3-4 February 2018. Members of MDA and students from schools throughout Greece, under the supervision and guidance of street artist Marios Sentoukas and the School of Fine Arts graduate Marianna Kolliri, sent out their own message of peace. By joining forces, they painted an artwork on a bed cover, inspired by the need to raise awareness of one of the 10 most urgent problems that have an everyday impact on the environment.

Honorary guest of the conference was Adolfo Pérez Esquivel, who was awarded the Nobel Peace Prize in 1980 for the defence of human rights in Argentina, as well as US Senator Gail Schwartz, Senior Policy Advisor of PeaceJam, and Alan Schwartz, General Counsel and Director of International Expansion..

PeaceJam is a US-based international organization founded 20 years ago by 14 Nobel Peace Prize winners, including the Dalai Lama, Desmond Tutu, Jody Williams and others. The aim is to develop innovative programmes to help young people cultivate their modern perceptions and their leadership skills to enable them to formulate practical solutions to multifaceted and emerging challenges.

The project was carried out as part of the ‘Global Call to Action’, in which Nobel Prize winners invite young people from around the world to take part in tackling these 10 issues and set up the One Billion Acts of Peace campaign. It is a global movement of citizens with the ambitious goal of one billion peace operations for 2018!

With the courtesy and hospitality of COCO-MAT